Borja Garcia (#1 Alex Caffi Motorsports Ford Mustang) was unstoppable in the ELITE 1 season opener at the Circuit Ricardo Tormo in Valencia, Spain. On his home track, the Spaniard led from flag to flag to win his second career NASCAR race and start 2017 on top of the points standings. Garcia also gave former Formula 1 driver Alex Caffi his first win as the Alex Caffi Motorsport Team Owner.

“It’s unbelievable!  I’m really really happy!  In the last two seasons, I have been so close to a win here with 2nd and 3rd place finishes.  Finally, in my third season and here in my hometown of Valencia in front of all my family and friends, I win!. It’s fantastic and really a dream come true,” said Garcia in Victory Lane. “Winning today gives us a lot of momentum for the rest of the year. Hopefully, we can stay in the top of the field through to the finals and have a shot at the title.”

The first round of the season was full of action and surprises, as the top three drivers from the 2016 season all finished outside the top-10 and it was reigning ELITE 2 Champion Stienes Longin (#11 PK Carsport Chevrolet SS) who emerged as the main contender for the win in Valencia. In what was his first ever race in the Series’ top class, the Belgian came home second and led the Junior Trophy classification.

“It’s really incredible!  I didn’t expect to finish so well in the first race of the season.  We worked really hard during the offseason in preparing my move up to the ELITE 1 series and it clearly paid off.  I feel I gained some speed. Of course, I recognize that some of my competitors had a bit of trouble today but we had a really fast car and my team works really hard at giving me top performing cars.  PK Carsport always has,” said Longin. “We will continue to strive for top 5 performances and if we have more finishes like we did today, we’ll be okay entering the finals.”

A contact in the first lap between Anthony Kumpen (#24 PK Carsport Chevrolet SS) and Frederic Gabillon (#3 Tepac RDV Compétition Ford Mustang) forced the Belgian to retire and take the last place on the grid for Sunday’s Race 2, while the Frenchman was penalized with a drive-through and ended up 15th under the checkered flag.

Alon Day (#54 CAAL Racing Chevrolet SS) ran second for the first ten laps of the race, but a restart contact with Garcia caused him a left from tire puncture and relegated him to 20th.

The ELITE 1 Round 2 will go green at 2:00 pm CET on Sunday and Gabillon will start from the pole, followed by Day. 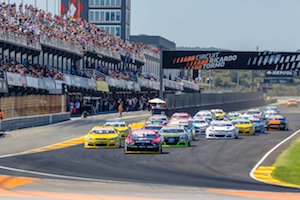 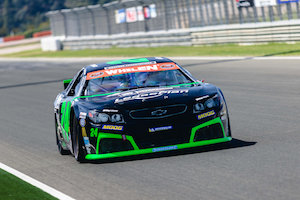 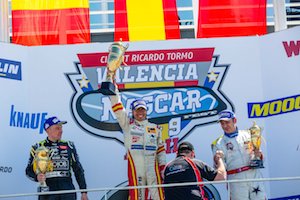 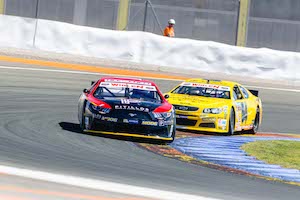