Borja Garcia (#7 Racers Motorsports Ford Mustang) put on a dominating performance to score his first career win on an oval track in the ELITE 1 Round 6 at Raceway Venray. The Spaniard led the last round of the Dutch weekend from flag to flag to score his third win of the season and extended his lead in the points standings ahead of the final race of the NASCAR Whelen Euro Series regular season.

As soon as the green flag dropped, Garcia pulled away to build a solid lead and mastered a restart on lap 20 to give Racers Motorsports their first ever ELITE 1 win.

After a joyous celebration with his team in victory lane, Garcia said, “This is fantastic!  I won at Raceway Venray!  I’m really happy and very excited for my team.  I’m so proud of them!  We had a few challenges before practice but my team is awesome, they made some adjustments and gave me a winning car.  I’m really happy!”  On the Championship standings, Borja said, “My second place finish yesterday and win today was very important for the point standings.  This is my 3rd win of the year, 1st on an oval track and I’m really excited about this season and the opportunity to contend for the NASCAR Whelen Euro Series Championship!

Behind the leader, the battle was on and delighted the Dutch fans with plenty of side-by-side action all over the track! Anthony Kumpen (#24 PK Carsport Chevrolet SS) was able to fend off every assault to his second position despite having his repaired following a crash in the ELITE 2 division race. The Belgian took home a solid result to move to second in points, 26 markers behind Garcia.

After receiving his 2nd place trophy, Kumpen said, “Yesterday I won, today I finished second.  Considering the circumstances, I think second was the best we could do today.  The car received a lot of damage this morning when it was caught up in a crash during the Elite 2 race.  I have a fantastic team and they were able to repair the car in time for the start of the race but we never had an opportunity to make any adjustments to get the car handling as it did yesterday.  All in all, I really can’t complain with our performance this weekend.  The PK Carsport Team unloaded a fast car off the truck on Friday.  We ran some blistering fast qualifying laps yesterday to win pole position and then the race.  Backing that up with our second place finish today, I’m leaving Venray with a good position in the point standings and looking forward to defending my NASCAR Championship title the rest of this season.”

A huge testament to the safety of the NASCAR Whelen Euro Series race cars, Freddy Nordstrom (#44 CAAL Racing Chevrolet SS), who also walked away unscathed from the same crash yesterday, came back today and managed to finish just outside the top-10 in eleventh place.

The only caution of the race came for a contact between Thomas Ferrando (#37 Knauf Racing Team Ford Mustang) and Christophe Bouchut (#66 DF1 Racing Team Chevrolet SS) in turn 4 while the two Frenchmen were battling for 12th. Both were checked and released but lost important points in the chase to the European NASCAR Championship.

The NASCAR Whelen Euro Series will now head to Germany for the first edition of the American Fan Fest at the legendary Hockenheimring on July 29-30. 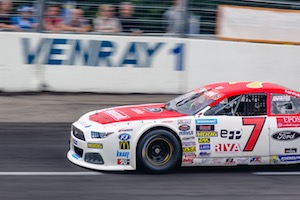 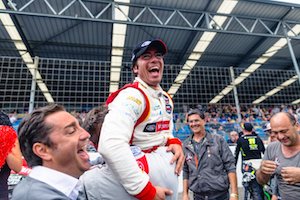 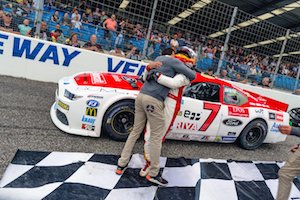 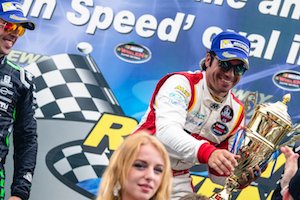 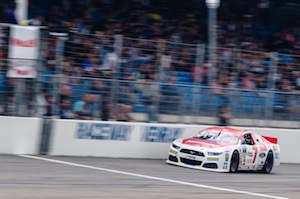