It was a massive celebration at the paddock for Liqui Moly Team Engstler after being crowned the 2017 TCR Asia Champions at the newly built Zhejiang Circuit in China on Saturday, 7th October.

The two-time TCR Asia Champions also celebrated the crowning of Thai driver, Kanthadee Kusiri, who after amassing a total of 188 points (after drop score) was named the TCR Asia 2017 Driver Champion. Teammate, Diego Moran of Ecuador placed third overall with his collection of 167 points.

“We are so proud to announce once again, our title in TCR Asia Series. This 2017 season was not an easy one with great competitors, but the outstanding teamwork shown by each and every member of our race family including the fantastic support from our partners ensured us this win” said Kurt Treml, Sport & Marketing Director of Liqui Moly Team Engstler, who was visibly happy after the two races.

Kusiri was beaming with pride when he claimed the Driver Championship saying that he drove a race for the Championship today. “My priority for the final two races was to collect as much points as I possibly could to aim for the Championships. The victory in the first race of the weekend took the pressure away from me which allowed me to just drive the car safely home for the final race. Taking the podium in third and being crowned the Champion was more than enough for a season that was both challenging, satisfying and really fun. Thank you to the team for a great year” said the 2017 Driver Champion.

For Moran, his approach was a little different this weekend, “when my team boss told me to ‘take full attack’ that was exactly what I did but a puncture in Round 11 had me visiting the box and somehow I was given a 30-second penalty when they said I was too aggressive in my attack.

“Race 2 was better for me, I had a better race than Kusiri despite racing without taking any risks and I was able to finish it in second. Third place in the overall standing, I am satisfied with that and I am extremely happy to have been able to contribute to the Team Championship” ended Moran.

Treml was full of praises for his drivers and crew, saying, “Kusiri and Moran, paired with the VW Golf GTi TCR and an incredible crew makes just a fantastic impact. There was not a single technical defect throughout the whole season which speaks for the quality of the German technology and an experienced team.

“I am especially pleased for our partners, Liqui Moly, Remus, Continental, Hella Pagid, Motec, Eibach, Recaro, Drexler Automotive and Galuppo Sports Ware, who not only supports us behind the scenes, but provide amazing on track support as well. They have been with us for many of our races over many years and we hope to continue the winning partnerships for many more great race years to come” he ended. 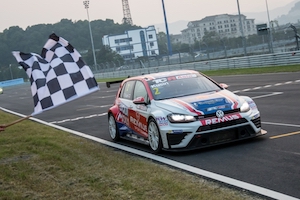