No reward for third starting position at the Nürburgring-Nordschleife

At the VLN Endurance Championship’s eighth race of the season, Norbert Siedler was forced to perform a ten-minute repair-stop because his car exceeded the noise limit value. Afterwards the Austrian and his team-mate Klaus Bachler (A) used the race on Saturday as a test drive. In the morning, Norbert Siedler had claimed a promising third starting position for the Frikadelli-Porsche.

For the first time in this season, the Frikadelli Racing Team decided to use Dunlop-tyres on the car of Norbert Siedler and Klaus Bachler. Shortly before the end of the qualifying, Norbert Siedler claimed the third starting position with a lap-time of 8:03 minutes. “Finally a lap without code-60-zones,” the 34-year-old was happy. “From that starting position, a podium result must be our target.”

But 90 minutes into the race, the dream of a podium result was over: Norbert Siedler had to enter the pit-lane because his car had exceeded the noise limit value. “The repair-break cost us more than a lap, therefore our race was over,” the Porsche-driver was disappointed.

After the involuntary pit-stop, Norbert Siedler and Klaus Bachler did some test laps, until the Frikadelli Racing Team decided to retire the car completely when it started to rain shortly after the first half of the race.

Despite the early retirement, Norbert Siedler drew a positive conclusion: “We were immediately competitive in qualifying with the new tyres without long preparation. That is very important, because the starting position has become quite significant in the VLN championship. Unfortunately we were not able to gain any long-run experience this weekend except for the first laps of the race. The test day on Friday was completely wet as well.”

In two weeks, the VLN Endurance Championship season finale will be held. Norbert Siedler and the Frikadelli Racing Team will start with Dunlop-tyres again. “I hope that we will experience a dry race weekend even though that is unlikely at this period of the year in the Eifel-region,” the endurance-specialist is looking forward. 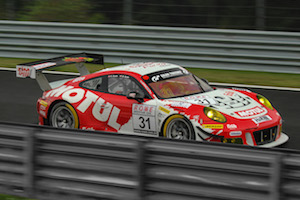 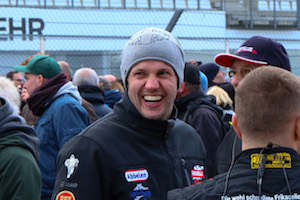