Norbert Siedler celebrated another podium result in his final race of the motorsport season, the Gulf 12 Hours. On Saturday, the Tyrolean’s Ferrari 488 GT3 crossed the finish line in second place at Yas Marina Circuit in Abu Dhabi (UAE). Even a tyre-failure in the first part of the twelve-hour-race did not stop Siedler and his Rinaldi Racing team-mates.

“This is a satisfactory end of the season,” Norbert Siedler was happy after his first participation in the race at the Persian Gulf. Shortly after midnight, the 34-year-old climbed onto the podium steps together with his team-mates Rinat Salikhov (RUS) and Marco Seefried (D) to collect the trophy for the second place. Behind the trio was an eventful race weekend with ups and downs.

Norbert Siedler and his team-mates were anything but content with the result of Friday’s qualifying sessions. The average time of the three drivers led to the eighth starting position only. “Our performance with new tyres was not good,” the driver from Wildschönau (A) analysed. “But things should look better in the long-runs,” he showed confidence.

Norbert Siedler took on responsibility in the starting period on Saturday morning and quickly improved a few positions, before he handed the car over to Rinat Salikhov and Marco Seefried. Already after a little more than two hours, the Rinaldi-Ferrari was within the top-three and on the way to a podium-finish.

But just a few laps later, a harsh setback followed: “After an accident the track was covered with sharp debris. We were unlucky and one of the parts led to a tyre-failure,” Norbert Siedler was angry. Despite the unplanned additional pit-stop, Siedler and his team-mates were able to stay in the lead lap. “This was a decisive factor, as the time gaps were neutralized during the break after the first half of the race. A lap would have been lost forever,” the endurance-specialist explained the race format in Abu Dhabi.

The second half of the race was started on Saturday evening. Again and again, the positions within the leading group changed, as participants of the GT and the prototype category as well had chances to win. After 302 laps, Marco Seefried crossed the finish-line in second place of the overall classification. A result, which made Norbert Siedler very happy: “Thanks a lot to Marco, Rinat and Rinaldi Racing. Everyone contributed to this success with a flawless performance.” 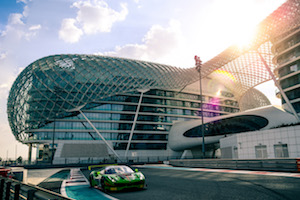 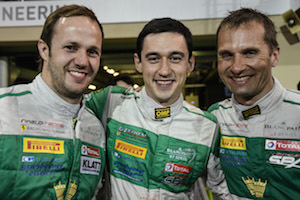